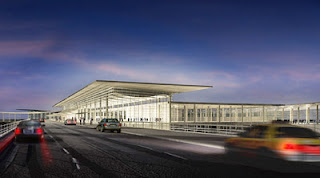 A performance like no other.  Choir and Orchestra drive to certain shopping centre where they are put on buses and driven to the new James A. Richardson International Airport.  After we passed the security gates, we were ushered into the new facility, which I must tell you is gorgeous!  I would say it is the best part of Winnipeg.  I think we should just keep the tourists here for their entire visit.

Choir and Orchestra are then put behind a black curtain, which we learned is actually called a  kabuki.  At dress rehearsal there was much talk of the kabuki and the accurate dropping of it.  The poor sod assigned the task of doing the kabuki drop appeared to feel the pressure and needed the dress rehearsal, which was earlier this day.  He wanted to watch the Maestro's downbeat several times so he would be sure to drop it at the right time.
Now at Performance time we can hear Tom Jackson's deep voice inviting Winnipegers on board. and when he intones, "Ladies and Gentlemen prepare for take off"  the Orchestra, from behind the curtain begins the dramatic Strauss"also sprach zahursta"  As that ends Alexander Mickelthwaite gives the downbeat for "O Fortuna" (the opening number in Carmina Burana) and the nervous kabuki string puller drops the curtain and a collective gasp is heard from the crowd as chorus and orchestra launch into the work.
In the interests of time the flirting number where the sopranos beg to be looked at was dropped.  Poor girls.  The Robust, "tempus est iocundum" was left in and this is where baritone soloist.  Mel Braun  did a whole-hearted job that increased every one's enjoyment of the piece!
The choir was in fine form, most notable were the sopranos who are asked to come up with several high B's at a piano dynamic. They did it in most ethereal fashion
Although we were singing for the Prime Minister, Mr. Stephen Harper, we didn't actually see him as the stage lights were much too bright to see him during our performance and as it was a high security affair we were whisked on and off the stage like the hired help we were and could not so much as say, "good evening" to the man.   The last time I sang for a Prime Minister I was 10 years old, and at that time I actually saw and spoke with the man.  That man was....aw shucks, I'll let you guess.

Thus ends my first performance of excerpts from Orff's Carmina Burana.
Posted by Lori at 7:04 PM