The passion season is a wonderful time for a chorister as it is filled with rehearsals.  I was put in the passion mood early as I have already completed a performance of Silvestrov's Requiem for Larissa in January and a concert of Taneyev's St. John of Damascus otherwise known as the Russian Requiem. in February. ( I wrote a post about it earlier)  Now, the month of March consists of rehearsals of Verdi's Requiem and Haydn's Seven Last Words of Christ. 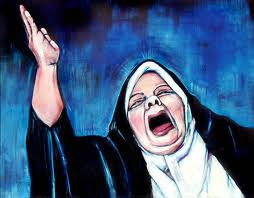 This is my third go around with the Verdi's very operatic Requiem and so I don't need to spend much time rehearsing at home so it  is causing me no stress whatsoever. A relief after the Silvestrov in January when I had to do so much rehearsing on my own and it still yielded minimal results.  Some may call the Verdi cheesy or over the top but I don't see why one would bother with those terms - it's quite simply called PASSION, people!  There is no more wrathful an experience as the Verdi Dies Irae, there is no more desperate a plea as his Salva me, no more copious tears flow than flow during his Lacrymosa.  The orchestra is huge, the choir is huge, and emotion is spilling out all over the place!  This is not a Deutsches Requiem by any stretch of the imagination, there is no contained resignation nor comfort in it whatsoever!  This is pure Italian Opera!   My score still contains the markings from my first performance of it with Bramwell Tovey - the mostly consist of the reminder "Think Italian".   This work also contains some of my best conductor memories as told in my post titled,"Ya, I know him."   I am loving being wrapped up by Verdi again and being held by all this passion and drama in order to release it all on April 19th with the WSO at the Centennial Concert Hall.

Before that emotional release  comes Good Friday and the First Mennonite Church's offering of Haydn's Seven Last Words of Christ.  With apologies to Josef, this work does appear cheesy at times.  It was originally written as a string quartet (no words) for a Good Friday service at a Spanish church.  Each movement was to represent one of the Seven last words of Christ - which are not words at all but statements.  Later on the words were added in German.  We are singing an English translation of those words. Working with translation seems to have messed up some of the lyric/dynamic combo.  What I mean is that there is a sudden Forte for the word "gentleness".  I have not checked the German score to see what words accompany that "forte" so it maybe that this is just Haydn's sense of humour coming out.  He is known for injecting humour in his works, although I think a passion piece is an unlikely place for this to come out.    Upon reflection I should not call this work cheesy because the Passion story is just that moving and if the music reflects that then it is merely being true to text.  Jesus' words from the cross are extremely moving and the music does show this.  This link, Seven Last Words, gives you the whole work  in German language. Our performance is in English, however, so please feel free to attend on Good Friday at 7pm.
Posted by Lori at 9:43 AM 3 comments: