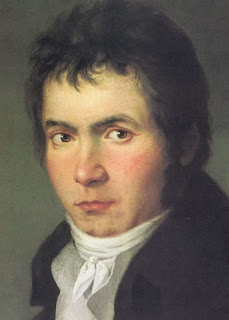 Ah Ludwig!  That most ironic of men.  A great Deaf Composer, who conducted his own 9th symphony without hearing a thing, nor the applause that erupted afterwards.

The Mass in C Major, however, did not receive applause from the man for whom it was composed.
Prince Nikolaus Esterhazy is said to have approached Beethoven after the performance asking, "My Dear Beethoven, what is it you have done here?"  It seems that ever since then it has been an underperformed work, but I am happy to say that I am in the midst of rehearsing it.   I stand apart from Prince Nikolaus in that I find the Mass, simply beautiful.  Although a much easier sing than the later composed Missa Solemnis, it is still absolutely divine in beauty.  The opening of the quiet awe-filled sanctus can put me in tears.  It is not dramatic but has a melodious orchestral beginning and then a few bars of acapella choir - gorgeous!  The  Kyrie eleison sets a beautiful tone in the call for mercy arranged for both choir and soloists.
The Mass is much more singable than the 9th Symphony, which I love to perform based on the sheer thrill of the performance but vocally it is very high and very fast for all voice parts; feeling like a scream fest much of the time.  In the 9th Beethoven appears to be more of instrumental composer than a friend of the singer.  In the Mass in C, the alto will feel none of that, however, I have heard the sopranos complaining about spending too much time sitting on their G's and A's.  Do I feel sorry for them?  Not a chance, they are sopranos after all, and if they aren't enjoying those high moments then what are they there for?
I will be performing this work with the First Mennonite Church Choir in Winnipeg on November 27th. Rehearsals until this point have been quite slow going, with much note pounding, but we are approaching the time where the conductor can spend time colouring and shaping our lines and I look forward to that!
Posted by Lori at 12:32 PM