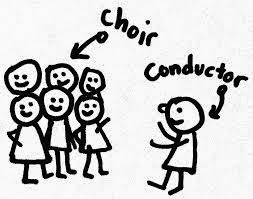 For this chorister this is a great time in the Choral season-  Requiem Season.  Requiem music is usually the most beautiful of all the compositions.   This season I am delving into Rutter's Requiem, Verdi's Stabat Mater, Faure's Messe basse and my all time favourite Brahms' Requiem.  As a Bonus I will also be performing the, Decidedly not Requiems,  Beethoven's 9th and Bruckner's Te Deum.
I have and am so enjoying them all!

The Rutter is being prepared by my church choir to be performed on Good Friday 7pm while the Verdi, Faure and Brahms were performed on March 1st  with the Winnipeg Symphony Orchestra and the Winnipeg Philharmonic Choir..
As I have mentioned on this blog before, Brahms writes so beautifully for the alto voice and his music is so heart searing that I leap at any chance to sing this work and have been fortunate enough to sing it many times.   The choir has many non-german speakers so it is not like rehearsing with my Mennonite church choir.  One hears many mispronunciations along the way which can be jarring to both Brahms and I.
Jarring to my conductor during rehearsals was how we sound.  Ha!  He was obsessed with getting the choir to rid themselves of, what he calls, "the bowtie sound".; the childlike sound produced by a fallen palate has opposed to a raised one.  He will mention it 6 or 7 times in a rehearsal and it is very embarrassing when he looks my way, gestures the pulling of a bowtie around his neck, and asks, "Why are you singing like that?"  I comfort myself by looking down and assuming he is referring to the bowtie singer behind me.  : )
In spite of this the concert went off well and you can read a review of it here. 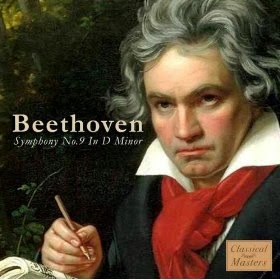 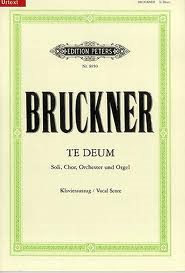 The Bruckner and Beethoven will be performed by two choirs who are being prepared by two different conductors and then will be presented to Maestro Micklethwaite at the appointed hour.  This will be interesting because both conductors have very different styles and different ways of pronouncing the Te Deum text, which the WSO has said must be sing in "German Latin" and not the regular type Latin we used for the Verdi.  This means the word coeli is pronounced Tsuli and not chelly.  At least that is what our conductor is saying.  Who knows what YK is doing over with the other one, but I have sung German Latin with him before and I know some things are different from what I am being told to do this time around.   When the two choirs come together for the first time on the 17th of March I will be chuckling to myself as we hear the not so unified pronunciation of the text, which will then have to be drilled and  corrected right up until performance time.  Yup, been there; done that.   For this concert I have left the Phiharmonic and am rehearsing with the Mennonite Festival Chorus. Uncharacteristically, we have a shortage of singers it seems in the Soprano, tenor and bass sections.  I certainly hope we will not adopt the Philharmonic practice of dropping in professional singers at the last minute.  It is annoying if one of these "saviours" gets dropped in your section at the dress rehearsal and proceeds to sing through and oblivious of all previous choral markings made - sounding beautiful of course but, ah," the whole rest of the choir is breathing here so would you mind not solo-ing through?"  Thankfully the alto section is usually bursting with us kick ass old lady types so reinforcements are not usually needed.

﻿﻿﻿﻿﻿﻿The Beethoven's 9th is tiring and laborious to rehearse best described as loud fast and high.  It does not sound it's best with piano only  but is absolutely stunning to perform with a full Beethoven orchestra!  The best part is you get to sit beside the orchestra as they play the first 3 movements and get all in the mood for the choral finale of the 4th movement which is so glorious!  It is the anthem of the European Union, was sung to mark the falling of the Berlin Wall, with Leonard Bernstein conducting and has been part of my choral repertoire for many years!

For each one of these years there has been a problem entry for the women  that clearly  proves why I am not a professional chorister.  The altos on a high E , the sops on a G and we come out of nowhere with no men around to anchor our sound.    I have never produced this sound to my
satisfaction.  I have come in at the right time but flat OR late but right note since I took it from my neighbour.  All female choristers are nervous wrecks in the beats preceding this entry hoping we don't come in early, hoping we can reach our note - and all this nervous Nellie behavior assures a screechy late entry.  Ah, well maybe this will be the year!

Of interest is that my rehearsal conductor with the MFC is that rare thing - a female!  May I say wonderful to rehearse with.  She is very organized, has her rehearsals so well thought out.  She knows just what sections to rehearse first in order that these motifs can be built upon later on.  She also shows good humour, such as when the tenors were loudly belting out their line marked pp ,she averted her gaze, walked over to the women's section, all the while conducting the beat, and said, "women, the tenors are like the tuba players; don't look at them it only encourages them."  My alto seat mates are completely wonderful competent musicians and I can lean on both in any given bar.  Thank you!
She does not let us get away with sloppy singing and states quite forcefully that what you just did was unacceptable and would you please adjust it.  If she has any passion or emotion about the piece she has not let us see it, keeping the rehearsals very technical.  I suppose this is a good thing for learning a piece but is so unlike YK, the conductor I sing for most often, who was crying at the very opening bars of the Brahms Requiem to the point that I feared he would not make it through the 7 movements.
Although I need the Passion of the conductor during performance I am learning that passion-free practice can be good.
(I have not talked about the Rutter, but maybe I will get to it after the performance)
Posted by Lori at 10:06 AM 2 comments: