Social Distancing and the Choral Life 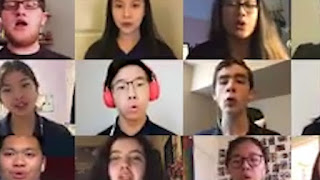 This was a requiem season like no other in my choral life.  Due to health directives issued in response to the COVID-19 virus, it was a concert free zone.  That very condition requires a requiem of its' own.  Choirs have attempted ways to carry on in the new environment. I am sure you have seen the laughable attempts to hold a choir rehearsal on Zoom or even sing a simple Happy Birthday.  It doesn't work.
Besides the loss of not being able to rehearse together with others is the loss of concerts I rehearsed for but could not perform. Their dates passing without the requisite concert week marathon rehearsals preceding them and no dressing in performance wear meeting backstage in nervous anticipation.  Among these were Berlioz Messe, Beethoven Mass, Dvorak Te Deum all with the Winnipeg Symphony Orchestra, a collaboration I treasure.  In addition was the much anticipated and so beloved Brahms Requiem with the First Mennonite Church Choir.
Some of these concerts are cancelled, some postponed.

One would think I had used my rehearsal free evenings to look at the scores and prepare for postponed concerts but one would be wrong.  The singing I have done, much too loudly, has been belting out tunes with Elton John and ABBA and I do a pretty good rendition of Brown-Eyed Girl.
My concert scores have remained closed receiving only glares as I pass them by.

Then came the unexpected.  My work-life mandated a Wellness Morning as part of a professional development day.  We were to watch videos sent by our boss, reflect on them, and choose a wellness activity in a mindful purposeful way.  This is easier said than done.  What to do?  Can't go for a manicure or a massage.  Could go for a walk but this is part of my daily routine already.  A helpful sister suggested I watch Judge Judy since hearing her call out, "idiot" can sometimes be as satisfying as a massage.  I realized that I would rather spend my mornings working than relaxing.  I am a work first, then relax sort of person.
In the midst of the stress of deciding how to practice wellness Haydn and Brahms called out to me and I got them off the shelf.  I laid out some of the scores of music I will, hopefully be performing in the next concert season. 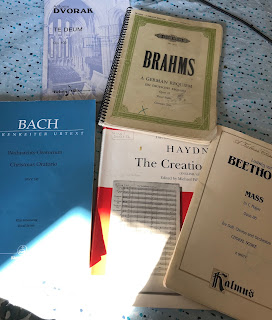 Beethoven called out the loudest so he and I headed down to the TV where I pulled up a performance of the Mass in C.  This was not as easy as it sounds.  I am fussy.  I wanted one where I could watch the singers and the conductor, and I wanted them to be good.  Finding none with Herbert van Karajan, my go-to YouTube conductor, I opted for this one out of Germany https://www.youtube.com/watch?v=4UzITmh5BD0  I usually choose European choirs. The reason being they are most likely to sing without score in hand.  This choir, sadly did not.  Nor did the soloists.  Still I didn't want to waste anymore time finding the "just right" sing along choir.
As the opening Kyrie began I became distracted by the treadmill visible from the corner of my eye, so I got on it and proceeded to sing and walk simultaneously.  The treadmill hummed in the wrong key, loudly, and my huffing and puffing did not allow for breath control required in most movements. This was less than ideal for rehearsal purposes, but since the performance of this will be way in the future it sufficed.
Some pleasant surprises.  In spite of not rehearsing for weeks my vocal range has not suffered and my memory of the piece was solid.  Coming across my various pencil  markings made me smile and I took heed of them:  "tempo" "torturned soul"  "NN" (there are 2 n's in Osanna), the circle around the time signature 12/8 of the Agnus Dei and the ever present arrow pointing up indicating to not sing flat. ( Oh dear, the cardinal sin that requires a blogpost of its own.)  When at last we reached the Dona Nobis pacem, the anguished demands and cries for peace, my soul was moved.  Beethoven was writing this during the Napoleonic wars therefore his cries have gravitas.
After the applause and the soloists and conductor had taken their bows I got off the treadmill feeling grateful to Beethoven and all performers who have kept his music alive over the years.
Did I derive meaning from choral music without my choir?  yes.  Is it enough?  No.  I yearn to gather with fellow choristers and look forward to the first post COVID-19 rehearsal.  What a day of rejoicing that will be!