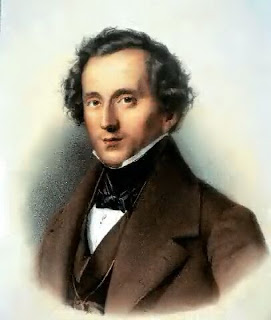 At present my church choir is rehearsing Felix Mendelssohn's Lobgesang.  You are forgiven for not knowing it as it is not performed very often, but I guarantee you will know another of Felix's compositions - Hark the Herald Angels Sing!  My Mennonite and German Lutheran readers will also identify the chorale that appears in the middle of the Lobgesang, "Nun Danket Alle Gott".    I will post more about the rehearsals as it gets closer to the Good Friday performance but for this post I will tell you a bit about Mendelssohn.
When rehearsing a major work I like to get into the "head space" of the composer and to that end I have borrowed several books from the library to help me do this and will share some of the stuff I have recently read.
Felix Mendelssohn was born in 1809 in Hamburg, but spent most of his growing up years in Berlin, a city he had a love/hate relationship with.  Loved because his family was there; hated for several reasons one being they did not offer him the state choir director's job, although it has been said if the ladies of the choir could have voted, the job would have been his.
That part of the world seemed to be full of great musical minds at that time.   Beethoven, who died in 1827 was still alive when Mendelssohn was growing up and Brahms was born when Mendelssohn was 23 years old.  Robert and Clara Schumann also shared life space with Mendelssohn and had him as a guest in their home.  They were great admirers even naming one of their children Felix.  Felix was also an acquaintance of Goethe and set some of his poems to music.
Felix was considered a child prodigy much like Wolfgang Mozart had been.  He gave his first concert at age 9 and when he was the ages 12-14 he wrote 12 string symphonies!  Not sure what you were doing when you were 12 but I was probably climbing trees.
One of the reasons I am a Mendelssohn fan is that he re-introduced Bach to the world.  Bach had fallen out of fashion by Mendelssohn's time but Felix, being the skilled musician he is, was crazy about Bach and conducted the St. Matthew Passion in 1829 which provided Mendelssohn with a catapult into fame as a conductor. Wherever he went Mendelssohn announced the fact that he was a lover of the music of Bach and often included Bach and Handel in his concerts.  He made his living by performing as violinist and a pianist and by composing and conducting.
Lobgesang  is also known as Symphony No. 2 and is a work that links a cantata to three symphonic movements.  It  had it's premiere on the date of my wedding anniversary, June 25th, although in 1840. (143 years before my wedding.)
This structure of a combining symphonic movements and cantata is unusual and seems to show how Mendelssohn tried to break down the barriers between secular and church music.  Felix himself chose the texts for this work from the Bible to highlight the triumph of light over darkness; spiritual awareness over ignorance. "The Lobgesang marked Mendelssohn's most ambitious attempt to dissolve the barriers between concert music and functional church music"  (Cambridge Companion to Mendelssohn)
It was written for the Gutenberg Festival in Leipzig which celebrates the invention of movable type, largely seen as a light in the darkness of ignorance and was premiered in the Thomaskirche there.
It is no small miracle that Felix was able to complete his Lobgesang in 1840.  Felix wrote the composition at the request of a publisher's festival committee and chose the texts primarily from  the psalms on his own.  During its gestation Felix rarely expressed as much pleasure about one of his compositions.
" In the middle of working on Lobgesang for the Gutenberg festival, Felix went to Weimar for a week to again rehearse and conduct his Paulus.  The last four weeks before the Gutenberg festival were truly hectic - Felix spent the hours from three in the morning until eleven at night standing at his desk, so he said.  He proofread the parts of Lobgesang as soon as he received them from the copyists.
...The Leipzig pastor Wilhelm Lampadius, who had sung under Felix's direction for the past five years, later described the audience's reception when they first heard Lobgesang.  'I sat next to the venerable Rochlitz and saw how his own and the general pleasure transfixed the dear old man's face...the composition evoked the greatest enthusiasm in the whole audience.
One sentence in Lobgesang enthralled Felix so much that he mentioned it in several letters:  He wrote,  "One cannot imagine nicer words in the Bible than those that precede Die Nacht ist vergangen, and they fit as if they were written for this music."" (Felix Mendelssohn: out of the depths of his heart by Helen Martens)
Wir riefen in der Finsternis: Hüter, ist die Nacht bald hin?
Der Hüter aber sprach:
Wenn der Morgen schon kommt, so wird es doch Nacht sein;
wenn ihr schon fraget, so werdet ihr doch wiederkommen
und wieder fragen: Hüter, ist die Nacht bald hin? (Isaiah 21)

We called in the darkness,
“Watchman, what is left of the night?
The watchman replies,
“Morning is coming, but also the night.
If you would ask, then ask;
and come back yet again.”


That may be one of Maestro Mendelssohn's favourite passages from the Lobgesang but my favourite sentence to be written by Mendelssohns comes from a letter he wrote to his friend in England letting him know he was coming for a visit.  In it he tells his friend to prepare for his stay and to  "incline the blondes to me."  This makes me laugh.   In his youth Mendelssohn loved the ladies and they loved him, but he did eventually marry and by all accounts had a happy marriage to Cecile even though his work took him away from home often and for months at a time.  He enjoyed spending time with his five children.  At the bottom of one of his letters to Cecile he changed to large-printed letters and addressed his five year old son, Carl,   My dear Carl, Thank you for your letter.  Be very good and do exactly what Mama tells you!  Greet Marie and Paul and little Felix, Auf Wiedersehen, mein lieber Sohn, F. M. B
There is the rather bothersome matter of Jenny Lind, a soprano whom Mendelssohn was clearly enamoured and some say he carried on an affair with her although there is no evidence of that.  It is clear however that they had a deep friendship and after his death Lind would describe him as "the only person who brought fulfilment to my spirit."
On 28 October, (1847) he was seated at lunch with Cecile when he suddenly started up, speaking with  great excitement in English.  He had suffered a mild stroke, and was taken at once to bed.  On 3 November he suddenly became restless and, at length, uttered a single piercing scream before falling in a stupor.  "  Felix's brother Paul was there and other friends as well.    "At 9:24 the following morning, Mendelssohn died."
'Mendelssohn had described the afterlife as a place "where it is to be hoped there is still music, but no more sorrow or partings".'  (The Life of Mendelssohn by Peter Mercer-Taylor)  I for one wish that for him and hope it for myself.

Being an Alto: from the perspective of a lapsed soprano

Today I want to share with you a piece of writing written by E.  Wieler, a lapsed soprano who writes so beautifully about being an alto that one may be forgiven for thinking she was actually born alto and didn't realize it.  Ms. Wieler now sings in the alto section with me and when you read her piece below, you will agree - She Gets It!
I look forward to reading your responses to this wonderful piece.
Being an Alto
from the perspective of a lapsed Soprano
Singing the alto part in a grand piece of choral music (think Handel’s Messiah, Brahm’s Requiem) is to know the wealth of glorious harmony from the inside, to know the strength of a pillar supporting the roof of a temple, to be the moderation for which everyone purportedly strives.  An alto is the viola, the brunette, the soothing voice of reason.  The question remains: are altos born or bred, and, can a soprano ever really be an alto?
Every soprano with brown hair is still a blonde.  She flirts, she flits, she flies, and never apologizes.  She touches the sky while soaring over the lumbering voices of foundation and pillar (basses and altos- a real soprano can’t bear to think of that precious rarity, the tenor).  Some may find her flight frivolous, but when the conductor and audience gaze at her with helpless adoration, she knows her work to be sublime.  Moderation is anathema to the soprano.  She cries, she trills, she strives, and knows above all, she is heard.  She is the melody.
Listeners leave the sacred hall of the performance with music ringing in their ears.  It is never the alto part.  The richest harmonies that make music worthy are simply a supportive framework for the easiest part of all, the soprano.  Altos must be content to be the hardy verdant greens beneath sweet rose and mauve blossoms in a much loved tapestry.  For every time the alto sings alone, she supplies the dominant merely to provide a suitable entry to the tonic, a resolution inevitably gifted to the soprano.  Having her momentary spotlight snatched from her again and again, she returns steadfastly to her best supporting role: the middle range, the tones that never trouble, always soothe; rarely excite, always appease.
The alto knows her audience.  While the majority of listeners focus on the soprano’s melody, connoisseurs and master musicians resonate to the alto’s resolute vibrato.  While the soprano prances for the masses, the alto sings to the few.
Among altos, it is generally agreed that she is born to her part, that she loves the ease on the ears of the lower range.  Most particularly, she maintains the pre-eminence of harmony to melody.  To her, a melody without its diverging line lies flat and empty.  She is born to hear a multi-layered symphony of sound withheld from mere melody singers.  That sopranos do not even feel their lack provides the basis of an alto’s superiority.  She knows and doesn’t flaunt it.
To slide down the bench from the soprano section in order to become an alto is to run the gauntlet, join an elite sorority, and withstand aloof disdain until the test is passed.  A sisterhood exists in this corner of the choir, miles from the competing prima donnas a few feet away.  Altos may at first seem haughty and arrogant toward a lapsed soprano, but if so, she is misinterpreting their strength of character for a supercilious nature.  If she allows enough time and demonstrates strict dedication to perfect harmony, the circle of altos will open to accept the newcomer.
And although she may occasionally feel a slight shiver of woe as the sopranos shimmer in the limelight, the altos around her stand firmly, feet planted, no regrets.
Posted by Lori at 1:40 PM 3 comments: