The Ode to Joy.  Loud, high joyful.  Fast, screaming beautiful.  Uplifting whirlwind transcending our human problems.  Freude schoener Goetterfunken Tochter aus Elysium.  Freudig wie ein Held zum Siegen!   Powerful and spiritual and so popular it is used my many a comedy sketch.  Seen here if you click on Sesame Street  and of course done here by the hilarious Mr. Bean.
It is monumental and yet  I feel that the we as a choir are oblivious to that fact.  We are doing some monumentally sloppy singing.  Consonants in the wrong places, words pronounced incorrectly notes sung at the wrong time and we have even managed to belt them out at the wrong pitch.  Not sure what is going on, and I am not sure I have ever been in this situation.  That is, where there have been so very many errors by so very many people this close to performance. 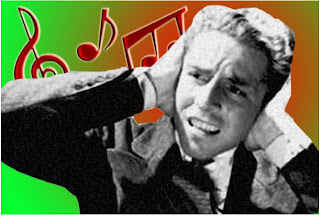 Tonight we rehearsed with the orchestra and I really don't think we were heard over all that Beethoven blasting in front of us, which is just as well.    Ironically I did not see too many smiling faces in this Ode to Joy rehearsal - even the man tinkling away on the triangle looked slightly angry.  Alexander gets full points for trying - he smiled as he perched pixie-like on his podium and I felt sorry that we were not giving him much.
We have a dress rehearsal tomorrow and then it is 3 days of performances.  I really hope something or someone will whip us into shape.  Where is Jane Glover's withering gaze when you need her?
In the end it will be Ludwig himself who will rescue us, his writing genius will be able to transcend our inadequacies. (I hope)