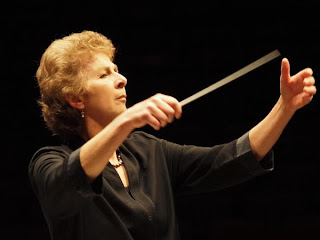 I have had two Mozart Requiem rehearsals with the skillful Mozart expert, Jane Glover.  Dr. Glover knows Mozart well, having studied much about him during the writing of her book, Mozart's Women.  She feels him in every part of this work and wonderfully transfers those passions to the choir.

She read to us a letter in which Wolfie consoles his dying father, saying that death is the only sure thing in life and something to look forward to and it is in that spirit that we are to sing the opening movement, Requiem aeternam donna eis domine.: with quite an upbeat feel.
In the second movement, Dies irae, we can feel that as his own death drew nigh fear of it did arrive as shown by the use of trumpets of which Mozart had a fear, almost a phobia about in his childhood.

The one truly sorrowful movement is the No. 7 Lacrymosa.That day of tears and mourning....It was during the composition of this movement that Wolfgang Amadeus Mozart died, in fact the last line he wrote was, "the guilty man goes to his judgment" and he was gone...from this point on in the music Jane shared with us that she always feels Mozart departing  and the ever ordinary Franz Xaver Suessmayr taking over the composition with Mozart's sketches in mind.   There is a floating quality in the music in the next few bars where Mozart's soul is floating up, then in bar 22 human rage at the creator begins, we are singing "dona eis Requiem" but we are in a forte rage at God for having snatched Mozart from us at such an early age.  Then in bar 27, exhausted by our rage we are somewhat resigned to his passing and our own eventual demise.

Ms. Glover has a way of transmitting this knowledge to us so that we too can feel all this passion.
She spoke with us in a soft confidential manner about "good old Sussmeyer."  She said that she herself has never and will never conduct any other Mozart Requiem.  She works exclusively with the Sussmeyer.  She acknowledges admiration for the brilliant one done by Robert Levin and mentions German composers who have completed the Requiem with much more skill than Sussmeyer, but is is Glover's contention that Sussmeyer was sitting on the edge of the bed taking dictation from Mozart, frantically trying to get all he could from the dying man and then did an adequate job of finishing it.  "We cannot abandon Sussmeyer now.  He was there and you can't replace that."   All this even though his Osanna is mere few seconds where as Mozart would have given us a glorious 4 minute
one. 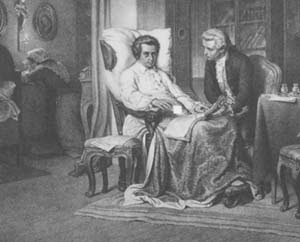 The fact that the Suessmayr version is somewhat ordinary is part of the charm of the piece.  It shows that the Musical Genius has died and now the ordinary takes over but with glimmers of Mozart since Franz Suessmayr did have the master's musical outline.
Jane Glover has a wonderfully collaborative manner about her.  When she arrived on the rehearsal stage she went to shake hands with a few of the musicians who, I presume, were not at her afternoon rehearsal.  She welcomed the choir and we felt as though each one of us was a valued contributor to bringing out Mozart's genius.   She repeatedly uses the phrase, "My friends", as in "That was very good my friends"  or "All right my friends let's take it from bar 23, all of us."  The orchestra is showing respect to her and seem to have an appreciation for the choir.  It truly feels like we are all in this together.
One of my favourite expressions of Glover's, which I remember from working with her two years ago, is the musical dynamic "mezzo quelque chose" used when really it is not a mezzo piano not a mezzo forte, just a "whatever".   She likes to tell us that in the Rex Tremendae movement there is no mezzo quelque chose; it is either forte or piano.
She often refers to the men as chaps, which is very charming as she has this wonderful British accent.  She sounds charming even as she says, after an attempt at the opening of Confutatis - "Well chaps, that was rather feeble.  You will need to try it again and with the realization that your manhood is at stake."   Ms. Glover,  the sopranos and altos were impressed with the chaps' second attempt.
Her conducting style is very easy to follow.  She has a masterful beat stroke with very clear entries and finishes and yet a very flowing style. She knows what she wants from each instrument and each voice part and is unapologetic about asking for it.   I do so like working with her.
Mozart and Glover are an inspirational duo to be spending time with during passion week.
﻿
Posted by Lori at 1:43 PM