Here I am in another summer dry season.  No performances nor rehearsals.  The usual depression was staved off by copious amounts of German beer

whilst cheering on the German team during World Cup 2014. I share three loves with Pavarotti:  music, food and football. (soccer to our North American minds)
Now that Germany has hoisted up the cup I must return to normal life and this, said normal life, is harder to bear without the sweet hours of rehearsal in it.
What is a chorister to do?
Time to look ahead at the upcoming Season.
1.   First off will be rehearsals for church Advent concert, but I don't know what that will be yet.
2. in mid December will be Handel's Messiah with Ivars Taurins!!!  I posted about this great Handel conductor in a previous posting and I am thrilled he is coming back and is working with our choir again.  Now that we know what he wants, his markings still relatively fresh in our minds, we will certainly be able to deliver a memorable performance.  Who can forget his unique musical marking of a squiggle over a group of notes.  Don't remember that from your theory classes?  Nope.  It is an Ivar marking meaning, "Do Something with these notes."  He also appreciates altos which gives him bonus points and clearly shows his worth as a conductor.  There will be two performances with the WSO, one will be a sing-along, which will have Ivars in Handel costume! Good times! 3.  Britten's War Requiem in March with the WSO and Alexander Mickelthwaite, who, have I mentioned, is becoming better and better at conducting choirs and seeing that we are also part of the concert.  He has also raised his passion up a few notches and so I find him less Peter Pan-ish than I used to.  This will probably be the most challenging work for me in that it is not from the baroque or classical period and I have never performed, rehearsed, nor listened to this work.   The Symphony Orchestra season guide has this to say about it:
Using massive forces of musicians and singers, English composer Benjamin Britten had a message when he composed his War Requiem in 1961: “My subject is War, and the Pity of War. The Poetry is in the Pity...All a poet can do today is warn,” the title page shows in poet Wilfred Owens’s words, on which the work is portrayed. Owens was killed during the last days of World War I. Britten’s War Requiem is among the most powerfully eloquent testaments to Owens’s universal message of peace.
4.  Good Friday performance of Rutter's Requiem.  I have performed this once before but don't remember anything about it.  Last season our church choir performed the Rutter's Magnificat after which a conductor from the audience named us "the Rutter choir of Winnipeg", so I am confident that after many note slogging rehearsals we will be able to deliver a respectable version of this Requiem.

So what will this chorister be doing this summer? 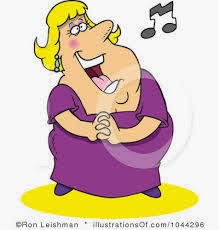 1. Sing along to favourite Arias in my living room just to know my voice is still there.  This last activity requires strategic timing, unless I don't mind my son bellowing in the background, "Turn that down! Stop singing!"
2.  Get a thrill when writing down rehearsal dates in my Calendar.  Might do this in two stages so as to prolong the pleasure.
3.  Listen to the two Requiems
4.  Perhaps order the Britten score