An interesting fact about choral conductors is that while a chorister gets to know the conductor and feel connected to him a conductor cannot be connected to the individual chorister, only to the choir as a whole.  For example, I go around saying I have worked with Jane Glover and Bramwell Tovey, and Boris Brott and I feel like I have an acquaintance with them, but does Maestro Brott ever tell his buddies, "Did you know I worked with Lori in Winnipeg?"  How many times do you think Bramwell Tovey has told his dinner companion, "Lori and I have done the Beethoven's 9th several times."  The truth of the matter is that none of these conductors would  know me if they tripped over me on their way down the concert hall stairs.
Of course, in smaller choirs like the church choir your conductor can choose to get to know you and your rehearsal conductor for the visiting superstar conductor may also be someone who knows his individual chorister, but even then, he is working with the choir not the singer.  The sound he is shaping is the choirs.
I thought I would share a bit about these conductors I "know".  Bramwell Tovey, for example, is the director of the Vancouver Symphony Orchestra.  When he was the conductor of the Winnipeg Symphony Orchestra I worked with him several times.  Together we did the Beethoven's 9th twice (and I was pregnant both times so when I was called up to do the 9th a third time I thought, "Oh no, am I pregnant again?)  I have also sung the Sea Symphony with him.  Bramwell, oh of course I am on first name basis with this conductor, is an easy conductor to work with.  He is wonderfully animated and relates humorous anecdotes with his wonderful English accent accent and vocabulary. He tells stories of his school days in England, his Mennonite in-laws, and his children, all with such wonderful warmth.  When I have worked with him as part of a Mennonite choir he will even use some low-german words which are incomprehensible when spoken with an english accent, but the attempt is endearing nontheless.  (How can I not feel like I know him when he reveals so much of himself?)   His whole body is involved in all he tells.  I so loved the time he was rehearsing the Verdi Requiem with the Mennonite Festival Chorus and in the Dies Irae section he was trying to get us to sing the "Quantus tremor est futurus, quando judex est venturus" in a diabolical whisper.  He hunched his back, curled his fingers bringing his hands up near his face, bent his knees and began to tip toe towards us, hissing "Quantus tremor est futurus..."  That evil troll image pops into my head every time I hear or sing that phrase in the Verdi. 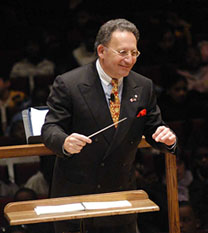 Boris Brott was also somewhat playful.  I worked with him for the locally infamous 500 voice Handel's Messiah in the 1980's at the, now torn down, Winnipeg Arena.  This performance was known more for the squeaky bleacher seats every time the choir rose and sat than for the singing.  He was easy to follow, had an animated face and took the whole thing as a lark.  I don't remember him taking one part of text seriously and when we sang "All we Like Sheep" he said it reminded him of the Woody Allen movie,  Everything You Always Wanted to Know About Sex  where it seems some people do like sheep. 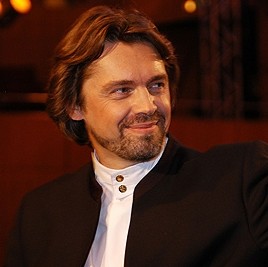 Then there was Andrey Boreyko with whom I have worked on several pieces.  We (yes, "we", just ask him) worked on Brahms Requiem, Arvo Pärt's  Cecilia, vergine romana,Patrick Carrabré  Creation Stories, Beethoven's 9th,  Dvorak's Stabat Mater and probably more that I can't recollect.  Boreyko was more god than human.  He glided to the podium, the respect coming to him from the orchestra was palpable, he spoke in a German accent and we hung on his every soft word.  He was demanding but made us eager to please.  As you would expect from a god, he was not revealing.
It is impossible for me to imagine he would have an every-day life to talk about.  I cannot picture him going shopping or mowing the lawn.  If I were to picture him off the podium it would be in black turtleneck sweater, cigarette in hand, brandy glass on table, poring over scores. and periodically pushing his hair off his face.  He is not of our world, and the passion he brings for the music is overpowering. Working with him ranks in the top of my choral experiences.  After a performance with him one feels as though they have been on a journey to another world and have returned shaken to the core and emotionally spent.
However, he can be very cutting in his remarks.  I remember shaking on my riser as, during a rehearsal of Stabat Mater by Dvorak, Boreyko lambasted the timpani player accusing him of having arrived without a sense of rhythm when he couldn't mimic a heartbeat. For many uncomfortable minutes the poor sod had to pound it out and then be met with a withering look from Boreyko. When Boreyko looks at you his gaze cuts right through you, leaving one quite weak kneed, for better or worse.
The opposite is true of the Chilean conductor Maximiano Valdés.  He most certainly thinks he is God but he is the only major conductor I have worked with who failed to move me at all.  He gave me nothing.  From him I learned that it is extreme torture to sing with someone who is not exuding anything.  He was robotic and uninspiring and it was such a great disappointment as he came with such an impressive discography.  When we met him for the first time I thought maybe he was sick and that by dress rehearsal he would give us something.  Nothing.  I worked and worked during the performance but felt nothing.  The performance was utterly unsatisfying.  This was sad as the work we sang, Mozart's Requiem, is one of my favourites but Maestro Valdes was so cold that even Mozart could not penetrate him.  This performance was the first and last one where I have cried tears of disappointment.

The major conductor I work with the most these days is Alexander Mickelthwate who is a look alike to Kevin Bacon.  He is a complete delight to work with and together (ha, ha) we have performed Beethoven/s 9th, Beethoven's Choral Fantasia, Beethoven's Mass in C, Beethoven's Missa Solemnis, Verdi's Requiem, Haydn's Creation, Brahms Requiem.  He speaks to us with an exquisite soft German accent.  He is complimentary and not very demanding of the chorus.  He is tiny and boyish as he perches on the podium like a sprite and I always have the distinct feeling that I am being led by Peter Pan. He is exuberant and bouncy during performance and makes the whole experience enjoyable!  My most memorable Mickelthwate moment is that he gave in to a rehearsal conductor.  In my experience the performance conductor always over rules the rehearsal conductor.  The general rule is that anything you may have rehearsed in the lead up weeks can be changed the first time the performance conductor meets you.  During the Verdi Requiem there are 7 bars that the altos love to sing.  They occur near the end of the piece when they interrupt a Soprano soloist and steal the show by singing in operatic fashion, on a C above middle C,  all by themselves, 'LIBERA ME DOMINE DE MORTE AETERNA IN DIE ILLA TREMENDA".  This is how we rehearsed it, this is how we wanted to do it.  Imagine how our hearts sank when at rehearsal with orchestra Alexander tells the Altos to just sneak in quietly , hardly noticeable.  What?  Hardly noticeable?"  That is what we have been doing our whole lives,  we can do that but surely not here, not in these 7 bars when we are so longing to shine.  Of course, being choristers and not divas, we dutifully whispered our Libera Me.   When leaving the rehearsal hall an alto friend and I were confronted by Yuri Klaz, our rehearsal conductor, who furrowed his brow and spat out, "What happened to you Altos?"
"Just doing what the Maestro instructed", I said.
"No,  no", he shook his head, " this cannot be."
Just then Mickelthwate appeared and with score in hand Klaz attacked him and I swept out the door.
At dress rehearsal the next day I could have shouted for joy when the instructions from the podium were, "Okay, altos sing it like you rehearsed it!"

Other major conductors I have worked with have been discussed in older postings here on this Blog.  Jane Glover and Noel Edison.  Edison in the Handel's Messiah posting and Glover in the posting called Jane Glover and the St. John's Passion.
Posted by Lori at 6:02 PM