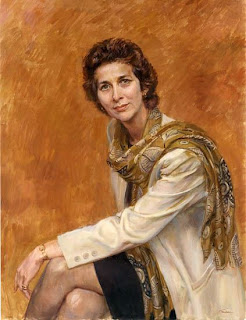 I have entered Concert Week and I am in the midst of the experience of a lifetime.  I have not sung a St. John's Passion with this much depth before, and this is my 6th experience.  (I had missed one in my previous posting of Bach's St. John's which was 1986.  at my age there is much to forget)
Last night was our first rehearsal with the great Jane Glover.  With her exacting manner and clear and precise, British accented speech, she was able to shape the Passion in a way we have not experienced before.  She spent most of her time with the Chorales, which is a surprising as there are several large and somewhat difficult choruses in the work, but her emphasis was on shaping the chorales into the monumental human condition statements that they are.  In her opinion one could spend 3 months just learning the chorales.  We were to feel the guilt of our sins and the injustice of an innocent going to die for them and then "tell me about that, but privately."   Prior to each Chorale, and there are 11 she would say, "I invite you to put yourself in it."
One of several shaping tools is dynamics and here she tried to wean us off of our habitual "mezzo quel que chose" as she put it.    We most definitely have to work on our pianos and pianissimos, although somewhat difficult with our 90+ singers.  I encourage you to listen to this beautiful example of a Bach Chorale, just so you know how achingly beautiful a Bach chorale from this Passion can be.
We made so many markings last night that I am not sure I will be able to keep my seatmate, who was absent, up to speed with all we learned last night.  We did not rehearse the "wohin" movement, as several from our Nonette were missing.  We will tackle it tonight and I am most nervous about it as well as eager, since I look forward to her further revelations on the piece. I am comforted by the fact that she herself admitted it is a difficult piece to get right.
She is the third revelation of St. John's telling of the suffering of Christ.  The first being St. John himself who wrote down this powerful narrative, then Bach who set it to the most glorious music thereby richly enhancing the story and now Jane Glover who has added further revelation by her detailed and impassioned immersion into the text.
Prior to an instruction we were sometimes referred to as "my friends" which softens us up for all her demands.  I am actually thrilled by all the demands, it feels good to be worked so hard and expectations set so high.  It was thrilling.  There is nothing blase about the Crucifixion story and there was nothing casual about her approach to it.
Then there was the revelation of a clearer separation between the crowd choruses shouting "crucify, crucify" and the choruses of the high priests, for example, "Schreibe nicht".    Now the music Bach wrote for each does automatically denote a difference since in the Schreibe Nicht we are accompanied by flutes which don't really suggest a bloodthirsty crowd and fits the higher learned priests but when the choir treats both as aggressive rabble rousing choruses the lines between the crowds and priests are blurred. Yet this is often how it is done and never has someone provided such a clear image as to how this chorus is to be sung.  Ms Glover asked us to sing it "lawyer-like", we are the rational  people telling Pilate, "listen don't write He is the King of the Jews, but rather He SAID, he is king of  the Jews".   Somehow it is so satisfying to be able to communicate this attitude with one's singing voice, and then to also be able to be the angry mob shouting, "Not this one, rather Barabam".
We will back to rehearsing with Ms. Glover tonight and will do our best to bring some shape to our phrases, clarity to our words, and varied dynamics instead of our "mezzo quel que chose" .  Our homework was to read the words of all the chorales and internalize them.  She urged us by saying,  "I would rather you sang some wrong notes than not mean these words you are singing."
Posted by Lori at 12:52 PM