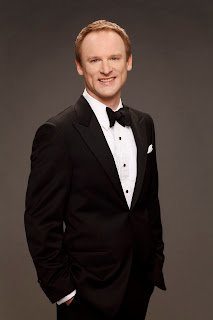 Lawrence Wiliford - tenor
Have just returned from the Bach Dress Rehearsal and must say there were some improvements since last rehearsal.  Our little "wohin" group is now standing together instead of us 3 altos being so far away from the tenors and sopranos.  We are closer because the 3 of us have been plucked from the alto section and plunked down in the middle of the tenor and bass section.   We are standing there throughout the whole Passion which makes it a bit awkward for us in that when Maestra Glover gestures towards us for an entry it is the men she is gesturing and not the altos.  When she means us she gestures far to the left of us, so that took a bit of getting used to but it is so much better to be able to do the "wohin" with the Nonet together.   That part of the rehearsal went well.
Glover continued to instruct the orchestra on finer points and demanded more from the choir.  The choir had some very feeble unacceptable entries that will have to be corrected for tonight.  Most notably in "lassest du diesen los" and "wir haben ein gesetz", the Chorales did not have enough text and intonation was a problem in some parts.  Gratifying, though was that Chorale No. 28 will be sung a cappela which must say that the intonation was fine enough.
The soloists, most notable the Evangelist Lawrence Wiliford, are the real bright spots of this rehearsal and I hope the choir will do their part tonight.