As a 14year old I set off through the streets of my small town, wearing a burgundy skirt, pink sweater and uncomfortable pantyhose clutching an address in my hand.  The address was that of Shirley Penner, the director of a girls singing group called Treble Teens.
I was nervous and had no idea what the audition  would involve.  My Mom had just handed me the address after school and said she had booked this time for me.  I knew my older cousin had sung in this group and I had seen them perform but I never thought I would be one of them. 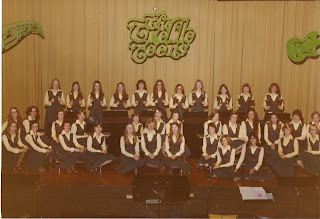 When I arrived at the house I was taken down to the basement and was asked to sing some scales and a familiar song.  I don't recall what I sang as I had no preparation ahead of time.  It was something like "Happy Birthday".    I was told I had a mezzo voice (having no clue what that meant)  and was put in the First Alto section of the senior choir.  We sang in a 5- riser arrangement - The first three risers were for first and second sopranos the fourth was the first altos and at the end were the second altos.  I sang with the first altos and am seated in the middle of that back row but secretly I longed to be a second alto.  Of course we sang many songs together as we did 2 and 3 part singing, but in the 4-part songs I looked longingly over at the second alto section.e of the back row of the first alto riser.

I loved my time with the Treble Teens, especially when we had intensive weekend long rehearsals.  I loved the feeling of us all working together to create something great.  I felt like a professional!
We even had a choreographer although pretty much all we did was "step touch step touch" but I was feeling more proud of myself by the minute!  It's not easy for a Mennonite without rhythm  (and we all are) to do the "step touch" while singing!

1975 Treble Teens sang with Piero Gamba and the Winnipeg Symphony Orchestra.   It was a Christmas special together with Will Millar, member of the Irish Rovers.  Of course, I was thrilled to be assigned to the "Back Stage Entrance" and have a dressing room with lights around the mirror!  Yes, the dressing room was shared by all 40 of us but thrilling nonetheless
Treble Teens also appeared in the ill-fated Peter Gzowski hosted show on Television.  (he was much better on radio) and we recorded an album which was not as easily done in the 1970's as it is now.  We also recorded in a studio on vinyl.  This was an interesting experience as we had to sing better than we had every sung before but no audience to relate to.  A good part of Treble Teens training was spent on stage presence and facial expressions none of which helped us in the recording sessions.  Here we had to rely on techniques learned in our weekly voice training.  It was harder than one would think.

Treble Teens was a great way for a young girl to catch the choral bug and this old lady has still not recovered.
Posted by Lori at 7:29 AM