Now in last rehearsal week for Felix Mendelssohn's Elijah with the Philharmonic Choir and the Winnipeg Symphony Orchestra.  The music has found it's way into my being and I hum it continually.  With 42 movements there is much humming material to choose from. 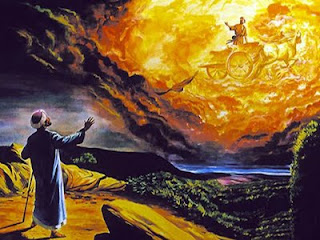 The Elijah is a very dramatic piece with raising a boy from the dead, a competition between Baal and Elijah's God, fire falling from heaven and fiery horses driving a fiery chariot into heaven to name but a few.  I have come a long way with this piece; from it all feeling rather cheesy at first rehearsal to now where I am looking forward to telling the story to our audience.  I am also excited  to hearing and seeing the incomparable Tracy Dahl at our dress rehearsal Saturday afternoon.  Having been left breathless by her while watching her on the Opera stage but never having worked with her on an Oratorio. I am thrilled for this opportunity.

Unfortunately I am coming down with a virus of sorts and have had sinus, nose and throat problems for the last few days which I hope will not escalate into something worse.  I need to have a fair bit of energy to perform this thing.   There is much for the chorus to do in this work and so I am left feeling exhausted just turning that many pages at times.  It is exhausting because my score (just like the rest of them) is very shabby and despite my taping efforts can be a struggle to hold.

Another problem with our scores is that they have both English and German lyrics with extra notes written here and there for each.  This is still confusing for some choristers and can result in sloppy sound coming from various pockets of the choir.  Of course by performance this will be ironed out at the next two rehearsals.

A pleasant surprise is that our conductor is allowing us to sing all the pieces that could be done by smaller groups or soloists like "Lift thine eyes"  "For all the angels"  "Cast they Burden".  These are probably some of the prettiest pieces and so it is nice for us to be allowed to sing them.  Although at last night's rehearsal he did have a smaller group sing the "Lift thine eyes" after a few attempts with all the women.  I don't think he has decided which way he will go on this one.  He gave no indication that the smaller group sounded any better than the whole so we shall see on Thursday.  Lucky for me I am in the smaller group so will get to sing it regardless, still, if we can all sing it I shall be happy! (The link above is a boy's choir; you can rest assured we do not sound as sweet.)
As in all rehearsal weeks the excitement will build until Saturday, climax during performance and then the inevitable let down.  For now I am in the enjoyable build-up stage!