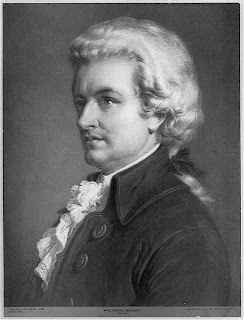 I am grateful to be rehearsing Requiem, by Mozart again.  It is like greeting an old friend.  This will be my 6th go around with it and the third with this conductor.  This means that it will be stress-free.  I already know what the conductor wants in virtually every bar, I listen to the recording to and from work so as to keep the whole thing in my ear and that is probably all the work I will have to do on it at home.
I am reading about Mozart's life as well.  The book I am reading now is called Mozart A Life by Maynard Solomon.  Last year I read the conductor Jane Glover's book, Mozart's Women.  Both books provide insight into Wolfgang's life.
It is no doubt that Wolfgang was a child prodigy who astounded people wherever he went.  Not a child prodigy who burned himself out but rather displayed great creative genius in his adult life as well.  While I am aware of the genius, as I am reading, I am now more  affected by the immaturity and selfishness of Mozart's Father, Leopold Mozart who cannot seem to understand that Mozart is grown up and can have success outside of his Father's sphere.  He is unable to share in the joy of his son's success unless he can attribute it to himself.  Mozart does spend much time and energy trying to win back his Father's love and respect.  The two commodities he lost when he became a success outside of his Father's town of Salzburg.
Mozart died at the young age of 36 while in the midst of composing the Requiem.  Although the Requiem was requested of him he often felt as though he were composing it for himself.  I quote form Mozart a Life by Maynard Solomon, "...Mozart began to speak of death, and declared that he was writing the Requiem for himself. Tears came to the eyes of this sensitive man..."
As if to prove his prophecy true he did indeed die prior to finishing the work but  "Mozart's friend, the singer Benedict Schack, claimed to remember that in the early afternoon of the day of his death Mozart asked for the score of the Requiem to be brought to his bed and that he, Schack, Gerl (the first Sarastro) and Hofer sang through it up to the first bars of the the Lacrymosa at which point Mozart began to weep violently and the score was laid aside.:
and also "on the day of his death he asked for the score to be brought to his bedside and said, "did I not say before that I was writing this Requiem for myself? After saying this he looked yet again with tears in his eyes through the whole work."
Thinking upon this during rehearsals of the piece does give it a certain pathos. Here is a link to an excerpt from the movie Amadeus which shows Mozart dictating the score to Salieri, which has no basis in fact but did make a nice movie.  I love this scene.
http://www.youtube.com/watch?v=ROllcRNrGI4
As to the Requiem and it's relationship to the Alto I can only say, Mozart is no Brahms.  But then who is?  Brahms' Requiem is filled with delicious alto lines for the chorus that are often song alone and even when not it is a line with a large range and beautiful melody.  Of course Johannes fell in love with an alto or two in his life whereas Mozart was in love with sopranos.  Still, it is the altos who introduce the first melisma passage in bar 34 of the first movement so there is something to be savoured there.  In the 4th movement, Rex Tremendae, altos are again the first to sing the theme and are often asked to sing along with the tenors when they have their go at it since there are rarely enough tenors to blast it out.  Not sure if we will be seconded for this duty this time around or not.
If you are the alto soloist in the two quartet movements, (and I have been her many times in my dreams and in my living room), you do have the honour of beginning both of them by yourself.  The Benedictus is particularly beautiful.
So it is that the alto section does not have much to do but to do their job which is to provide a springboard for the sopranos to leap up on, and a nice little filler cushion so that the tenors don't stand out too much and become grating. And yet...
I love singing Mozart.  The whole work is melodious and significant.  The Confutatis will bring you to hell and the Lacrymosa will make you weep.  The Benedictus will soothe you and you will close with the longing for eternal rest with the Saints.  After all has been sung and done my soul will weep with gratitude for having spent this bit of time with the genius who is Mozart.
Posted by Lori at 7:10 PM