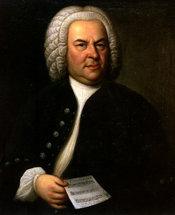 I have begun Bach rehearsals - Joy!  Mennonite Festival Chorus is preparing Bach's St. John's Passion for performance with the Winnipeg Symphony Orchestra, conducted by Jane Glover.  I am excited to be working with her and will hopefully be able to share this experience with all of you.  It will be the first time I will have performed a major work conducted by a woman.
My First St. John's Passion was in the early 80's with conductor Henry Engbrecht and the First Mennonite Church choir. I believe it was part of a city-wide Bach Festival.  It is a difficult work for a church choir to tackle and I recall that some of the more demanding choruses were sung by a smaller group.  This group would often rehearse on Saturday mornings outside of the regular choir practice.  As a young University student I was thrilled to be digging into Bach in this way.
I have also performed it twice with conductor Gary Froese, once as a member of the Winnipeg Philharmonic Choir and once with First Mennonite Church choir.  The 4th time I performed it was Good Friday 2010 also with First Mennonite Church choir but then conducted by Maestro Yuri Klaz .

Now for round 5.  Bach's St. John's Passion is a highly emotional telling of the story of Christ's suffering as told in the gospel of John, from Judas' betrayal, the appearance before Pilate, and the crucifixion. It is a very theatrical piece with parts for Jesus and Pilate and the Evangelist.   The most tender dialogue comes from Jesus on the cross.  When he sings  "Siehe das ist deine Mutter" hearts break.    Besides the dialogue soloists parts there are the angry mob scenes played by the chorus.  We sing the most piercing and shrill choruses screaming out "Kreuzige, Kreugize" in dissonant and intentionally painful harmonies.  The chorus also sings 11 chorales that stop the narrative action and are times of reflection on what has just occurred.  These are beautiful and personal.  Here is a recording of the first chorale. "O Grosse Lieb" http://www.youtube.com/watch?=nagRCkQKPzg&feature=fvsr The effective ways in which Bach matches music to text illustrates so well why Bach is sometimes referred to as the 5th apostle.   Jesus often speaks in solid authoritative fourths, the reflective chorus that follows a slap to Jesus' face is filled with first inversion chords which are the most tender of chords.  Another example of word painting is when the evangelist tells us that Pilate scourged Jesus.  The German word for scourged is "geisselte" and it takes the Evangelist 52 notes to sing geisselte, although we long to turn away this wrong doing goes on and on.
Bach's St. John's Passion is book ended by two large choruses.  The opening chorus, "Herr Unser Herscher" and the closing chorus Ruht Wohl are both very satisfying to sing.  The latter being a tender graveside song.  It is difficult to sing with dry eyes.
The Mennonite Festival Chorus is not a church choir and therefore this first Bach rehearsal was void of the note pounding that was so much a part of the Mendelssohn rehearsals a few weeks back.  This rehearsal chorales and choruses were sung all the way through and repeated for phrase shaping and dynamic clarity.  We also did some singing in circular formation which helps us hear the other parts of the choir better.  With only 5 rehearsals before we meet with the orchestra, choristers must come to rehearsals with a good knowledge of our notes and general feel for the piece.
Our rehearsal conductor, prior to Ms. Glover's arrival is William Baerg who, together with his wife Irmgard, was the recipient of the WSO Golden Baton award.  Mr. Baerg's passion for Bach and for music-making make rehearsals enlightening and satisfying.  Walking out of this rehearsal I felt completely drained and peaceful.  I look forward to each of the next few rehearsals and then the performance.
Posted by Lori at 10:14 PM