Wohin? Where to indeed! 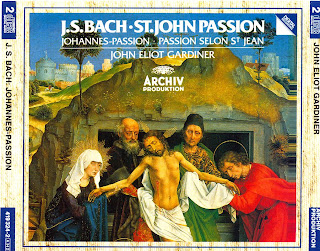 Tucked into the Bach  St. John's Passion is good old number 24.  It is a Bass Aria.  The Bass quite beautifully and often chromatically calls out "Hurry, hurry you oppressed souls."  Oh but were it only a bass aria one could be happy, but alas, while he is singing this there is a small chorus part that calls out "Wohin?  Wohn?"  (Where to?)  .  This is a part all choristers dread.  It is impossible to get everything right.  Some intervals are easy, some are hard but it is difficult for an amateur like myself to figure out  which interval is coming up as they come up so quickly, and since the bass is constantly singing "hurry, hurry"   the chorus is completely panicked and behaving as though we are truly lost; which we are.  This fits in  quite well with the whole drama but for some reason conductors prefer it to fit in musically.   They would like the right interval to occur at the right time.  The wohins are never on a downbeat, of course, that would be too easy, so there is a constant uneasy feeling.  A smart conductor will never have the whole choir sing, as they say it should be done quietly,  but really it is because it would be impossible to have 30 voices  saying the right wohins at the same time.  So, typically a small group will be asked to do this.  (except of course in the video I linked above where mere children manage it  I play this to myself often when I need taunting.)
I have sung in the small wohin group several times and still have not perfected it.  Woe is me, this Easter weekend will be no exception.  Bill, my 2011 conductor was in the audience in 2010 when I cackled out the wohins quite chicken- like so he should consider himself  forewarned.   The thing is, although I have sung it several times I am not confident in my own sense of timing, so if I feel anyone in the ensemble take a sharp breath, as one must with these wohins I will assume they are right and  also breathe in and after that quick breath I will sing the "wohin" whether Bach says so or not.
In 2010 my conductor, Yuri, graciously gave us each and every wohin as he knew full well that we would never be able to do it without him pointing his chin and hand at us for each and every entry.  We were spoon fed all the way, which was fine and good for a church choir performance but this 2011 performance will be at the concert hall with dear, Jane Glover, and the WSO who may feel that she has other things to do besides hold our hands.  Given the fact that we are singing "Where to?"  it is probably okay if singers call this out randomly like some lost souls who are really and truly seeking.  The bass does provide the answer after every series of 8wohins which is "to Golgotha".  When the audience hears the ensemble chaotically  shrieking their way through this piece they will feel like they are at Golgotha, place of horror, and I will certainly be doing my part to create the atmosphere.
I could perhaps ask the conductor if we could sing this from off-stage.  I will tell her it is because the wohins should be coming gently from out of nowhere.  This will save me from actually standing up there visible to the entire concert hall as I lurch through the piece.  The whole thing has a rather desperate quality to it.  I notice on my John Elliot Gardiner recording that there is no such trouble.  I could bother the good Maestra with another suggestion, that she play the John Elliot Gardiner recording while I lip synch, in that big hall no one will notice that my lip movements do not match the singing.
If any of you have "wohin" experience perhaps you would like to pinch hit for me?